Philippe Graffin's documentary: Ysaÿe's Secret Sonata
Hidden in a Sketchbook
Most violinists recognize Eugène Ysaÿe as a legendary figure. His influence on modern violin playing, beloved compositions, and musical institutions lasts to this day. Works such as Debussy’s string quartet, Chausson’s Concert and Poème, and Franck’s Violin Sonata are among the soulful music defined by the largeness of Ysaÿe’s character. In Ysaÿe’s Solo Violin Sonatas, unmistakably modeled after the six unaccompanied violin works by Bach, musicians will find a deeper story of intrigue and human connection. These pieces hearken back to the end of the older Romantic traditions, when music aimed to capture traces of a spirit. Each of Ysaÿe’s six solo violin sonatas are dedicated to a specific violinist. The character of each work imbues both the playing style and personality of that particular artist.

The source of these sonatas is a sketchbook in which Ysaÿe detailed plans for musical projects. These include concert programs, collaborators, and compositional drafts. The Opus 27 sonatas are included, with each dedicated to an exemplary violinist of the upcoming generation, some of whom were his pupils. All six works were drafted from 1923 to 1924 in Knokke, a resort on the north-east Belgian coast. The sketchbook was discovered amongst the collection of papers and items that belonged to the British violinist Philip Newman who, before his death, gifted them to his friend, the Belgian violinist Josette Lavergne. Lavergne later donated the entire collection to the library of the Koninklijke Conservatorium Brussels. This mysterious sketchbook appeared undisturbed.

While holographs were ultimately made for publications–those for the second and third sonatas belong to the Juilliard Manuscript Collection in New York–this sketchbook is a significant preliminary source containing drafts and corrections for the entire opus. Inside the ornate cover, Ysaÿe scrawls “Six Sonatas” with a list of names hidden beneath furious scribbles. Just below, he re-lists each work, titled with tonality and corresponding dedicatee. Compared to modern publications, the second and fourth sonatas were originally switched. A list of other dedications to cellists and violists are written in the margins, including the names Casals and Tertis.

In 2018, nearly a century after the conception of the Opus 27 sonatas, the French violinist Philippe Graffin examined the sketchbook, stumbling upon a nearly complete seventh sonata for solo violin. These pages titled “6ème Sonate” include a work in C major that bears no resemblance to the E major Sonata known today as the Sixth. The initial pages are drafts depicting a messy compositional process. Excerpts are jotted all over the pages accompanied with nearly indecipherable notes in the margins. An interesting labeling system of syllabically divided composer names organizes these disjointed excerpts. The end of one, labeled “Bee-,” connects to another down the page, labeled “-thoven.” “Mo-” connects to “-zart,” “Schu-” to “-bert,” and so on. Some passages are paralleled with scaffolds of notes outlining a harmonic progression. Some sketches calculate finger positions for technical execution. A few measures are “looped” in with pencil for insertion. The transparency of the draft is stunning. One sees the inner artistry of the master behind the pencil.

Additional pages show that the compositional process for this original sixth sonata was advanced. Following sketches of a viola sonata and the Poème Nocturne, the full three-movement C major work reappears in cleaner script as if carefully printed for an engraver or copyist. The title dedicates the work to the Spanish violinist Manuel Quiroga. Few editorial corrections are labeled in purple ink. “This is a big discovery for violinists,” says Graffin. “When you find something that is unknown in manuscript form, it is usually not in good shape or form, but this is rare–it is very good. It has one of the best slow movements [Ysaÿe] ever wrote. Clearly written, [it] starts with a beautiful long melody–it is also very enjoyable to play. It is very strange to me why [the sonata] was not finished.”

The finale movement trails off after the first staff of its second page. According to Graffin, the material bridges back to the first theme. With the subsequent pages empty, the question of how the E major sonata replaced the C major as the Sixth Sonata is intriguing. The E major sonata, drafted in the same sketchbook, was completed on 10 May 1924. 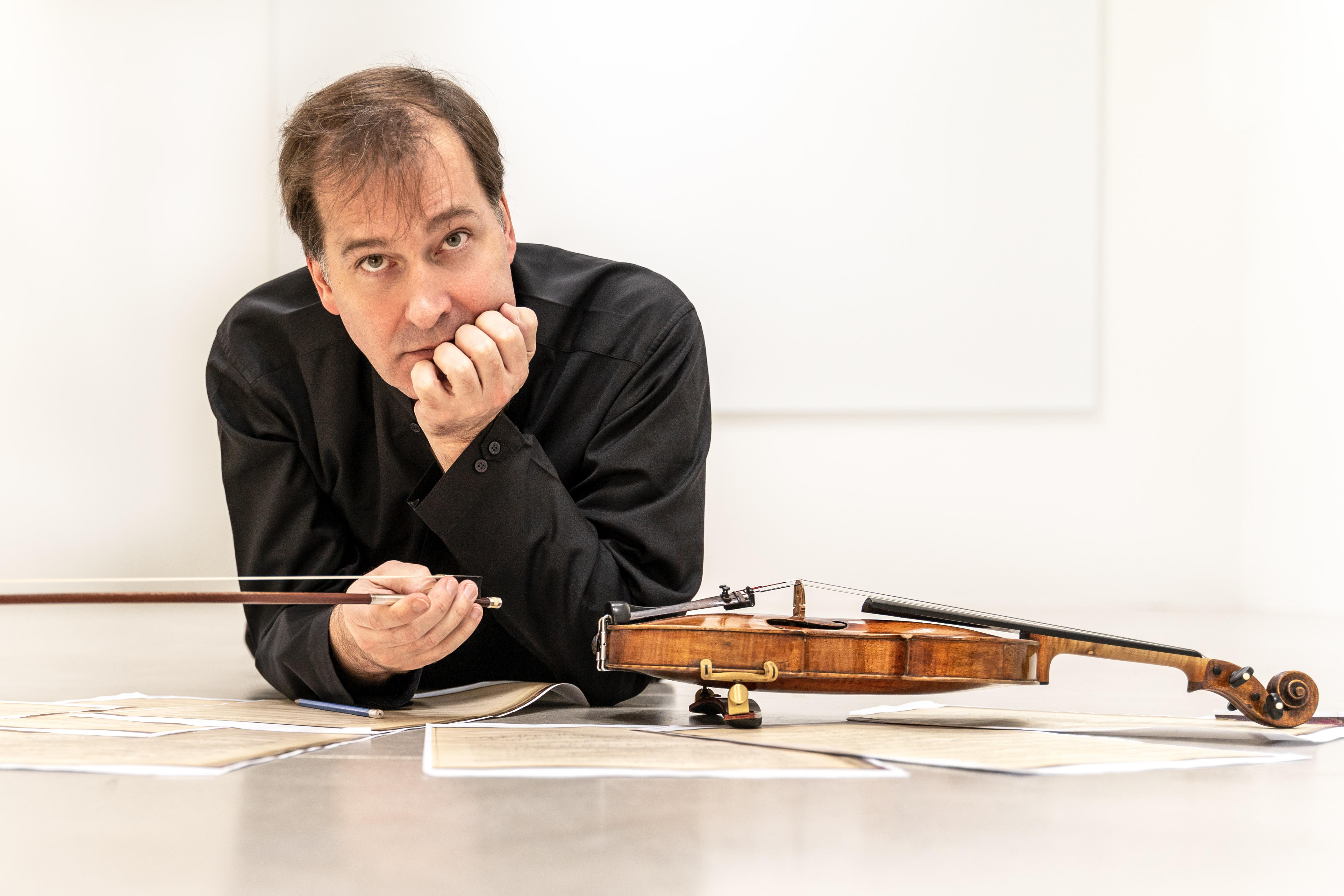 Quiroga’s Spirit in the Music
As performers increasingly rely on the editorial work of specialists, the direct examination of source materials, such as manuscripts and draft sources in sketchbooks, is not as necessary or common today. While each artist has their personal musical process, the vast amount of music one prepares often prohibits this type of in-depth exploration. According to Graffin, one can therefore be easily deceived by the type of source. “Because it is a sketchbook, people think these are sketches being put together. This is not. It is a very clear first draft. There are sketches for other works all around it. It’s a mess. You have an idea here or there of what things are going to be combined–but for this work, this is not a puzzle.” The actual puzzle is piecing the narrative together: how did this original sonata fit into the entire concept of the Opus 27? What was the context for its original conception? How is this discovery pertinent to the performers of these visionary sonatas?

Graffin’s new documentary titled Ysaÿe’s Secret Sonata focuses precisely on these subjects. The film details the discovery of the unknown C major sonata, building an understanding of Ysaÿe’s musical legacy from his compositions. The greater part of the film spotlights Knokke, also called Le Zoute in French, as an important center for Ysaÿe and his violin students. Archival interviews with Nathan Milstein and Maurice Solway illustrate the vibrant musical atmosphere at Ysaÿe’s residence, full of stories about violin lessons and chamber music parties with the maestro and the Queen of Belgium. Josef Gingold, with whom Graffin studied in America, pointed out a direct relation between the solo violin sonatas and his personal memories of Knokke during lessons.

While the other sonata dedicatees like Jacques Thibaud, Joseph Szigeti, and Fritz Kreisler are widely known today, Manuel Quiroga remains the most obscure. The film follows Graffin on a journey to Pontevedra, Quiroga’s hometown on the Iberian Peninsula. In conversation with Quiroga’s great niece, Milagros Bará, the film dives into Ysaÿe’s concept of capturing a dedicatee’s personality and playing style. With the discovery of the unknown sonata, Quiroga is the only one portrayed with two works. “Ysaÿe had probably perceived in [Quiroga] two very different personalities,” notes Graffin. “One, very proud, very virtuosic, very brilliant, more jovial, loved by everyone. And another, more sombre and probably more profound. It is the latter this [unknown] Sonata resembles.”

Manuel Quiroga was regarded as the spiritual heir of Pablo Sarasate. His concertizing career effectively ended when a traffic accident in New York caused an irrecoverable arm injury in 1937. Quiroga’s talents as a visual artist sustained him; he made a series of caricature portraits of fellow musician friends in the 1940s. He was also a composer, although he could not continue with the onset of Parkinson’s disease. The film records Graffin bringing a copy of the original sixth sonata to a city square where a statue of Quiroga stands, playing the violin for friends seated around him. In Pontevedra where he died, Quiroga is remembered as a violinist. The sonata, analogous to a message in a bottle, holds traces of someone whom Ysaÿe considered very important to the musical world. While Quiroga did create a caricature of Ysaÿe, Ysaÿe’s musical portrait of Quiroga lives on as a performative experience. This documentary is a powerful and poignant tribute to Ysaÿe’s legacy. As performer, composer, mentor, and friend, he is still known as one of the greatest violinists who ever lived.

A Story from the Past to Publication
Ysaÿe belonged to one of the last, wonderful generations of performer-composers. Although the Opus 27 sonatas are widely known by violinists, many of his works are still under extensive research and being introduced into the musical literature. The original sixth sonata, edited by Graffin, has been completed for forthcoming publication by Schott. Graffin completed the unfinished finale movement using fragments of discarded material from the first movement. He asserts, “the idea was not to finish the end as my own, nobody wants that. It was important having as much Ysaÿe as possible without changing what he had written.”

The anticipated edition will include additional markings. As the other six sonatas are marked with symbols regarding bow usage, the C major sonata will be annotated by Graffin in the same style. “These [annotations] should be treated as expressive markings,” he explains. “The markings are quite specific–like, the use of a lot of bow on certain notes. I think it’s to make sure those particular notes are important for harmony. Normally, you feel these notes are very important but missing on the violin, like a pedal.” Graffin expects the seventh sonata to quickly become an important part of the violin repertoire.

A full recording of the sonata is already released on the 2019 album Fiddler’s Blues by Avie Records, featuring Graffin with pianist Claire Désert.

The documentary film, Ysaÿe’s Secret Sonata, can be watched on YouTube.

Fiddler’s Blues can be heard on Amazon, iTunes, and Spotify.

The seventh sonata will be published by Schott as Sonate posthume pour violon seul, Op. 27bis. 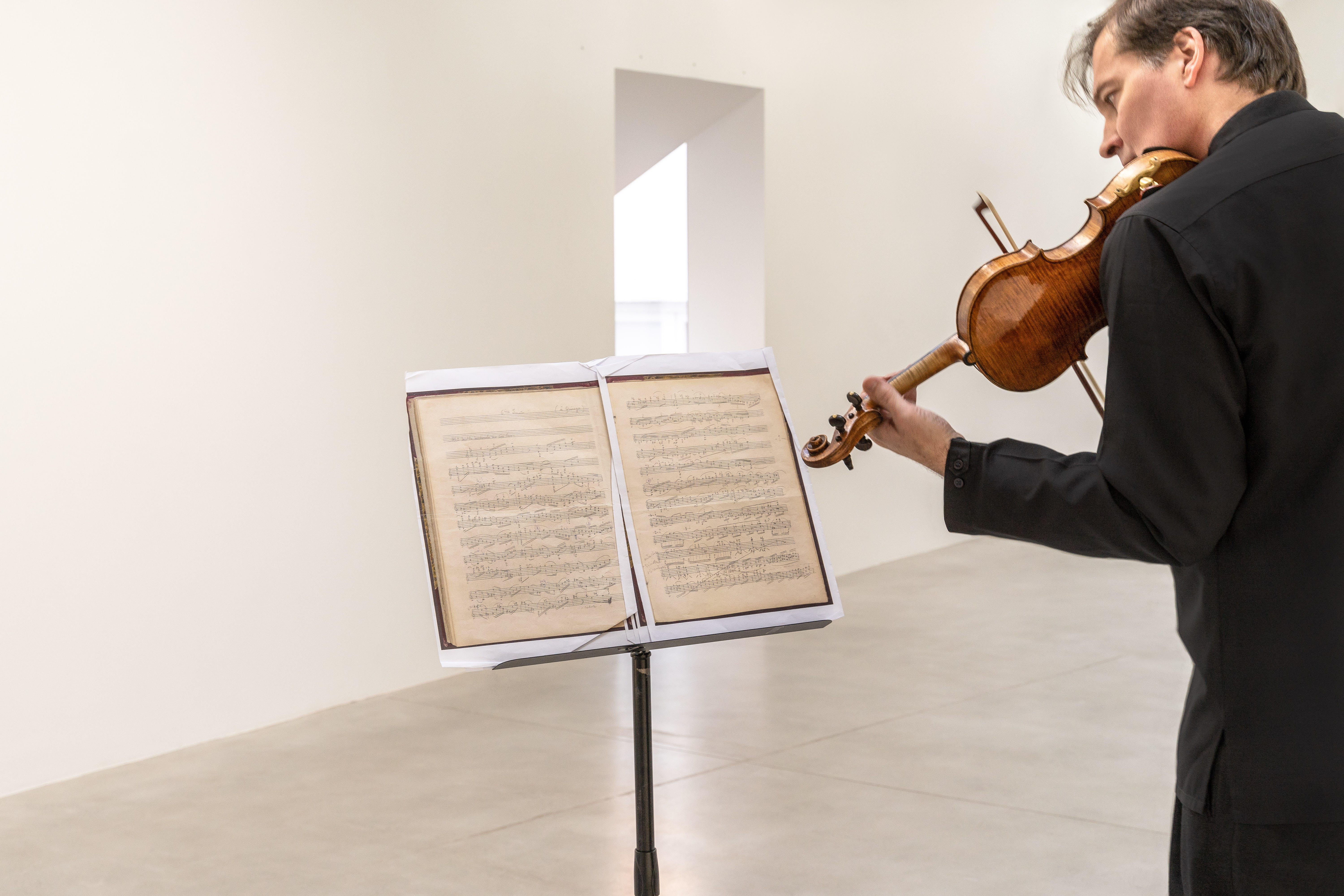